Speaking of cultural differences, the recent thing came into my mind is mushroom picking.  Mushroom picking is a part of European culture.  From Wikipedia.org “Mushroom hunting, mushrooming, mushroom picking, mushroom foraging, and similar terms describe the activity of gathering mushrooms in the wild, typically for eating. This is popular in most of Europe, including the Nordic, Baltic, and Slavic countries and the Mediterranean Basin as well as in Australia, Japan, Korea, Canada, and the northwestern, Indian subcontinent, northeastern, Midwestern and Appalachian United States.”  I wouldn’t speak for Appalachian United States, but I can say for American South, that they have no idea about this innocent entertainment. I think this good, because there is no competition here.  I would even say that in Russia there is a definitely Mushroom hunting, but here it’s more like mushroom picking.

I remember 10 years ago when I studied at Emory, my husband (boyfriend at that time), I and a couple of friends (Andrea-she was a Peace Corps volunteer in Russia), and her husband-an American policeman went to mountains for hiking… Everything was fine and fun until I saw a mushroom family at the mountains.  They were lisichki (foxy) as we call them in Russia (Cantharellus cibarius in English), one of my favorite mushrooms because they are rarely infected with worms, easy to clean, orangy cute, plus they are very tasty with sour cream and potato. So, without any hesitation I jumped in and started to collect them.  Suddenly, faces of my American companions was in horror, and they first they tried to talk me out of this business. I have to say that it wasn’t an easy thing to do because I love mushroom hunting and I can’t help but want to pick up good mushroom when I see them.  I tried to explain them that I know this type, it’s good and tasty, but nothing helped.  They basically povisli on my hands and took me back from those mountains. I almost cried, but they felt like they saved my life. Especially the policeman. Adrienne lived in Russia for 2 years during her Peace Corps service. I am sure she was introduced to this activity, but her husband was as serious as only a policeman could be(to be continued) 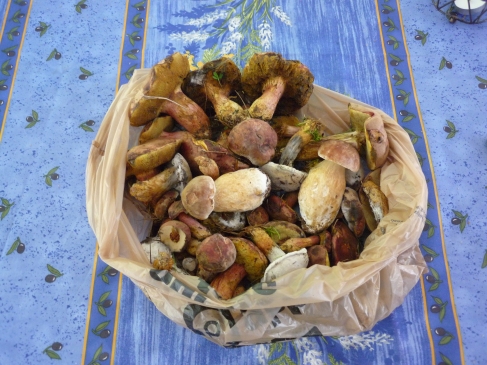